The last five years have been nothing more than spectacular for those that endured the stock market collapse of 2008-09.  Now we find ourselves six years post crash, market performance is at record highs and the rumblings of fear have returned.

The chart below tracks the MSCI World Index along with select Time magazine headlines during the stock market decline and subsequent recovery.  Assume you invested $1,000,000 in this index on October 2007, which is the absolute peak before the subsequent crash.  At the bottom, your portfolio declined 54% (can’t get much worse than that!) and your million bucks was only worth $459,709.  Ouch!! 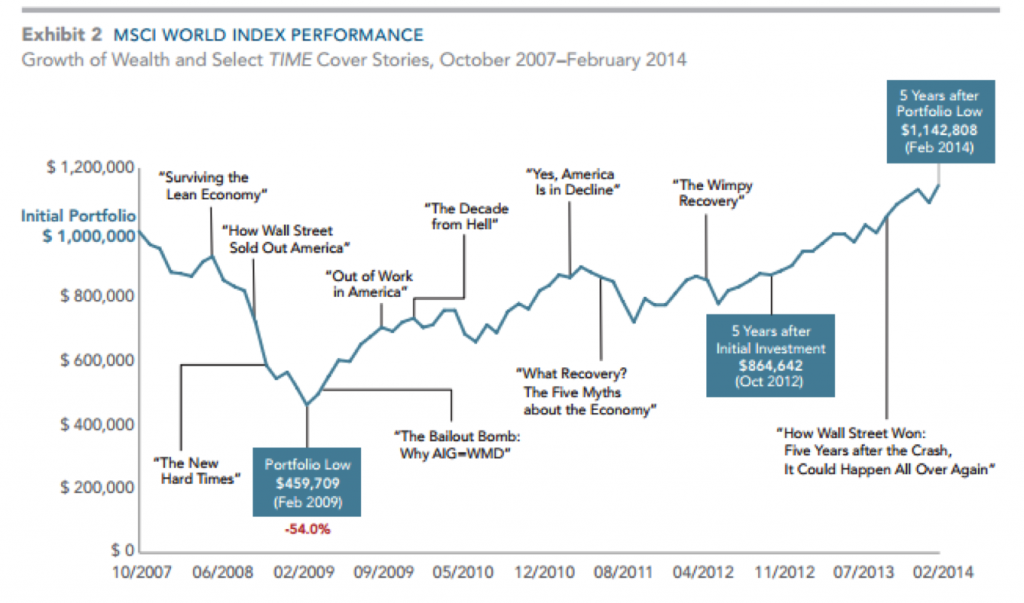 Does the chart bring back the fear you felt during that time?  Losing half your portfolio is awful, but it is important to revisit history to understand the correlation between the news headlines and investment performance.  (Hint: There is none.)

Headlines use fear to make us we read the article.  Fearmongering is how they sell newspapers and advertising.  Richard Wessler, PHD psychologist at Pace University in Pleasantville, NY says “Humans are programmed by nature to fear things that harm us, so our fright buttons can very easily be pushed.” Since humans are wired to avoid danger, we are instantly sucked into a negative headline.  How we react to fear is the difference between those that enjoy investment success versus those that don’t.  The only people harmed in the long run by the Great Recession were those that sold assets.  It is not their fault; they were defenseless against the constant bombardment of negative news.

Losing money is never fun, but the recovery has always happened.  Let’s review the 5 worst crashes since 1973 and the subsequent results.  In every case you recouped your $1,000,000 investment and then some — but only by staying invested.

Fortunately your investment career is likely to exceed 30+ years.  If that’s the case you will endure more than one of these markets during your tenure.  The key to long-term investment success is knowing your Point of Independence – the point where work becomes optional forever.  The BluePages, our proprietary financial planning process, is designed to help you understand how much risk (defined as losing money) you can endure to achieve your goals.  Call us now to get started on your BluePages today.