After two gate changes and a mad dash at the Atlanta airport, I ducked into the bookstore while I waited for the passengers to deboard our delayed flight.  I decided to look at the financial section, and I had to do a double take.  David Booth and Eugene Fama from Dimensional Fund Advisors (DFA) were on the cover of Barron’s weekly financial newspaper with the headline Market Beaters.  This magazine, along with many others like it, have highly-opinionated, fortune-telling articles that tap into our emotions of fear and greed. DFA on the cover of Barron’s?  Not in my lifetime (or so I thought).  2014 is off to a very strange start.

It was over 20 years ago that I first met Dimensional Fund Advisors at Southern Methodist University. SMU allowed a group of greenhorns to manage $2 million of their endowment as our final class project in the portfolio management curriculum.  DFA spoke to our class one day and my theory about investing changed forever.  After graduation, I called to ask for permission for my future clients to invest in their funds even though I had no prayer of meeting the $2 million minimum (remember this was 1993 dollars).  Fortunately they said yes.  After completing a rigorous training program (required of all DFA advisors), DFA’s groundbreaking research became the foundation of our investment philosophy.  Twenty years later we are still very thankful for that day.

The foundation of the DFA philosophy relies on four very simple things:

1.  Markets work —  Think of the stock market as a large voting booth.  Every day buyers and sellers gather to trade based on their perception.  Any new information, good or bad, is instantly priced.  Fama developed this theory, called the Efficient-Market Hypothesis, which is why he was awarded the Nobel Prize in Economics this year.  Many mistake this theory to assume that it is a pricing model in which prices are correct – it is not.  It only says that the current price reflects all available information. Absent knowing something that is private, the market knows what you know.  Active management which is the art of picking stocks or timing the market relies on guessing tomorrow’s stock prices.  Most people eventually realize that markets do work, active management does not work and give up the guessing game to follow the S&P 500 index.  (We will learn later why this is not an ideal alternative.)  DFA, established in 1981, relies on academic research and the Efficient Market Hypothesis as the foundation of the firm’s investment philosophy.

2. Risk is rewarded — Imagine you are a banker and you have two different borrowers – one with a high credit score and a secure job versus a low credit credit score and recent bankruptcy.  Would you charge a higher interest rate to lend money to the bad credit risk?  Of course.  Well, as an investor, you are a lender. You lend your capital through the stock market or the bond market to companies that need money.  In 1971, Rex Sinquefield, student of Eugene Fama and co-founder of DFA, was shocked at how difficult it was to get historical stock market performance data.  He teamed up with Roger Ibbotson and in 1976 published Stocks, Bonds, Bills and Inflation which highlighted for the first time the performance gap between stocks and bonds1. 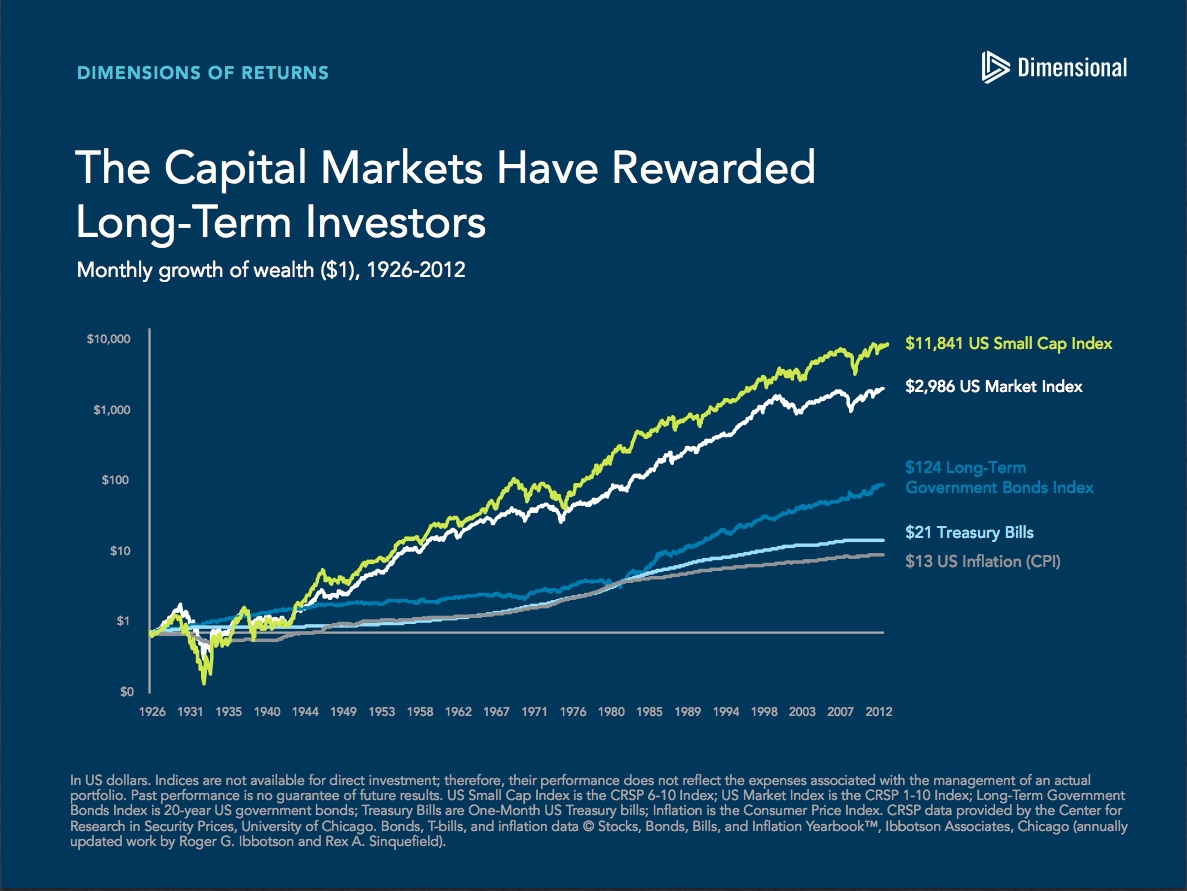 In 1981, he and David Booth launched DFA with the Micro Cap fund, one of the first institutional small cap funds designed to capture this small cap stock premium.  In 1992, Fama and Kenneth French discovered the value premium, which suggested that value stocks had higher expected returns than growth stocks.2  DFA launched their value funds shortly thereafter.  According to historical stock market data, small value companies and large value companies have exceeded the return of growth stocks in their size categories by 6.08% and 2.39% respectively.3  So by simply tilting the asset allocation of your portfolio away from growth and toward small and value, an investor should be able to improve their long-term investment experience dramatically. 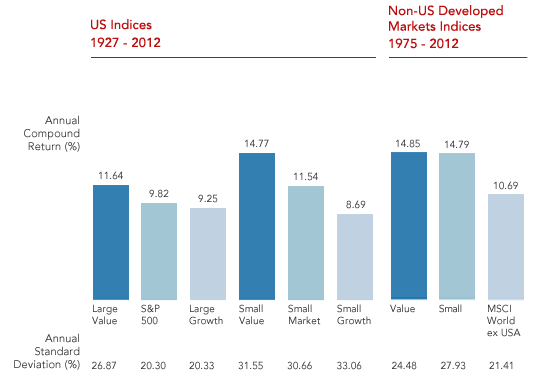 DFA created mutual funds to focus on these dimensions of risk.  Their goal is to own all the stocks that meet their academic based criteria.  Many of their funds hold over 3,000 stocks in the portfolio.  In a sense, they are the benchmark.

3.  Costs matter —  Saving 1% per year in fees over a 30-year period of time will result in over a $1 million difference in the value of two identical portfolios (chart below).  The average fee of a mutual fund according to Investment Company Institute is 1.40%.4  The average expense ratio for a DFA equity mutual fund is .36%.5 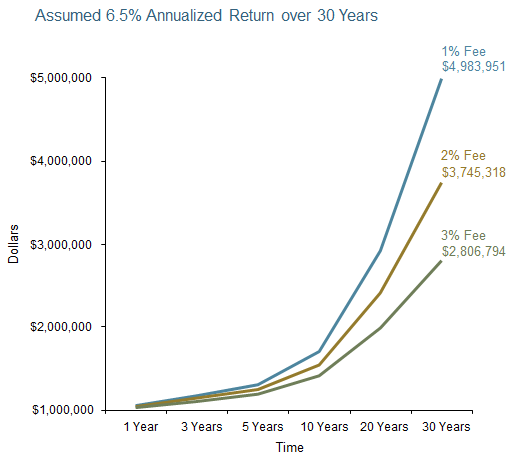 But it goes beyond just low expense ratios — the hidden fee of the stock and bond markets is the spread between the purchase price (ask price) and the selling price (bid price).  Trade poorly and you hurt the returns of the portfolio.  Unfortunately, like a pipe leaking underground, you don’t see it but it costs you money.  DFA is one of the largest traders of illiquid securities in the world.  They are market makers in over 14,000 stocks.  They may be passive long-term investors but they are active at saving money on trading. If market conditions are not beneficial, they don’t have an issue waiting.  Managing the bid-ask spread is critical to saving money.

4.  Indexing is Bad; Passive Investing is Good —  In 1975, Charles Goodhart, the economic advisor to the bank of England stated, “When the measure becomes the target, it ceases to be a good measure.6  No truer words about the problem of indexing have ever been spoken.   An index is a brand just like Coke or Pepsi.  The S&P 500 Stock Index selection committee makes the decision to add or delete a stock.  There is no science to it – just S&P’s methodology.  Currently $1.3 trillion follows this non-scientific metric.7  Once a stock is added to the list, the price jumps immediately, even though the actual investment date is a few days away.  Academia calls this the “index effect” and it is significant, just like buying snow shovels after a blizzard instead of waiting until August.  Here is an excerpt from a paper titled “Gambling on S&P 500’s Gold Seal8”:

We observe a significant price increase of 4.54% on the first day after an announcement of impending S&P 500 inclusion, as well as a cumulative price increase of 2.38% for the average 4-day period from the first day after announcement until the day of the event. The “price pop” is partially reversed on the first three days after the event but the positive effects of inclusion seem to be permanent.

In layman’s terms, the study found that investors tracking the S&P 500 index pay a 6.92% premium for every stock added to the index.  This gets expensive.  The index effect occurs in other indexes as well and since many ETFs track indexes, this makes them a poor choice despite their low costs. DFA may be passive but it is not an index fund.  Their focus on the value and small stock premium is based on academic research, not someone’s random benchmark, and they capture the returns of these asset classes by trying to own every stock that meets the criteria.  Avoiding the “index effect” helps improve the performance of the portfolio.

While these concepts seem like common sense, they are a revolutionary change from the typical investment experience.  Working only with institutions and financial advisors, DFA has quietly grown to the 8th largest mutual fund in the world (over $332 billion of assets).  We are so thankful to have been involved with them at a very early age and are very happy for their success.