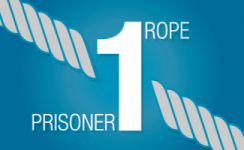 A prisoner serving a life sentence desperately wants to escape. A simple sunrise is torture. But then one morning he finds a rope in his cell. The problem is, it’s only half the length he needs to escape. So he divides the rope in half, ties the ends together and gains his freedom.

Unfortunately, other people see our problems with more clarity.   Our perception of reality is more like a painting than a photograph.  The reality we think we see is a combination of our interpretation and fact.  Our brains are so good at creating this vision that it’s hard to spot the real from a fake. This is especially problematic when your business, your family and your independence are at risk.

To guard against my reality-vs-perception problem in my business, I assembled a team of people I respect that includes clients, consultants, other business owners and even some of my competitors.   Most are surprised by the number of people I rely on to help me.   Other people see my problems with a clarity I just can’t.

In my role as a financial planner, I use this same collaborative process as well because far too many people execute on what they think they see rather than what is actually there.  Relying on the wrong picture of reality for your family’s independence is a very dangerous thing.   The person with a helper has a much better chance of seeing what is already there.