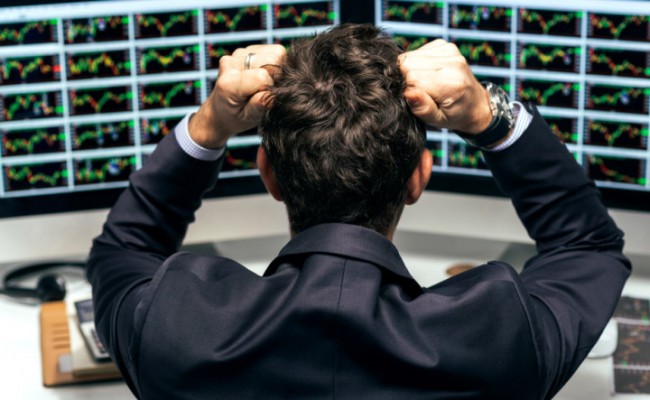 It’s not unusual for my phone to ring in the wake of a financial crisis.  May 6, 2010 was one of those days. Around 2:30 that afternoon, the Dow Jones Industrial Average plunged nearly 1,000 points, only to recover all of those losses 36 minutes later. During the tumult, many exchange-traded funds (ETFs) were priced as low as a penny per share. This event, triggered by a trading error on S&P 500 futures contracts, became known as the “flash crash”.

A few weeks later, an attorney called asking about the merits of a potential case. His client lost over $2 million because his ETF limit orders triggered during the “flash crash” and he lost out on the quick recovery. This investor wanted to sue his ETF provider for the harm caused by the very product that was supposed to provide him with financial security. He just learned an expensive lesson about ETFs – that they are a dangerous product that should not be part of anyone’s portfolio.

Investors and financial advisors — especially robo-advisors — have come to love exchange-traded funds. The expenses are low; they are easy to use; and they offer ready liquidity (or so it seems). Annual ETF net issuance grew more than four-fold in the ten years from 2004 to 2014, according to data from the Investment Company Institute.

But ETFs aren’t the efficient investment vehicles many may think. Flaws in the fundamental design of the ETFs make them a potential landmine in your portfolio.  All it takes is a brief spell of market volatility, like the one we just experienced this past August, for them to detonate.

In a bout of deja vu for ETF investors, an early 1,000-point drop in the Dow Jones Industrial Average on August 24, 2015 rattled investors. The major market indexes were off between 5-6 percent within the first hour. But certain exchange-traded funds, including some tracking those same indexes, had fallen anywhere from 20 to 40 percent.

Let me repeat that for emphasis — some ETFs had declined 20-40%, while the indexes they tracked had only declined 5-6%.  Check out intraday trading on these ETFs and some of their underlying investments on that day: 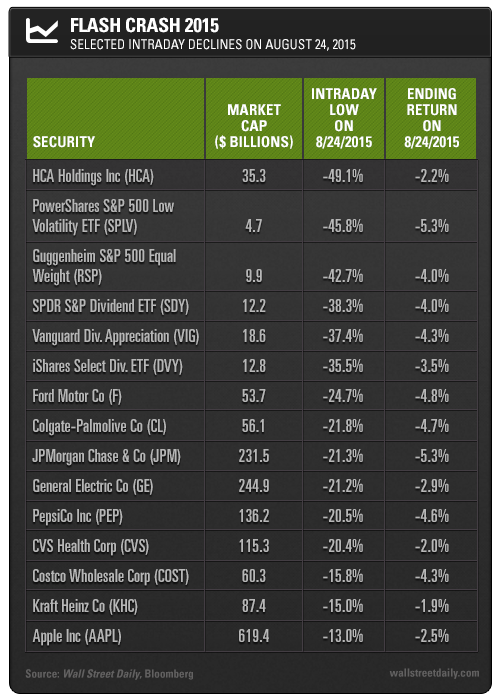 Here’s how an article in the Wall Street Journal described the “ETF flash crash” of that day:

“Because this happened so quickly, many ETF market makers, or the broker-dealers who buy and sell those products, were unable to accurately calculate the value of the underlying holdings or properly hedge their trades. That caused them to lowball their buy offers and overprice their sell orders to ensure they didn’t take on too much risk. This sent ETF market values tumbling, too, and caused disruptions in the trading of other assets.”

The very people intended to protect the price of the ETF for the average investor hit the exits during the crisis, causing a clear breakdown in the market pricing of ETFs. How could a product that is supposed to track the index “perfectly” diverge so greatly from the average?

It happened because the ETF’s chassis is flawed.  Here are the reasons why.

For the price of an ETF to be correct every second of the trading day, it depends on the arbitrage mechanism so the underlying share prices track the net asset value (NAV). For example, in an ETF tracking the S&P 500 Index, the ETF trading price has to match the market movements of all 500 stocks in the underlying portfolio every second of the trading day. In a sense, it’s like simultaneously driving 500 cars with one foot on the accelerator and the other on the brake pedal switching between slowing down and speeding up to make sure the prices match perfectly.

Obviously, no human can complete this task.  Only computers can do calculations of this magnitude at the speed required to keep up with the market.  And we know that computers are only as effective as the human-designed algorithms that drive them. On August 24, there were enough examples of the de-coupling to realize the risk is very real.  Extreme volatility creates gaps between ETF share prices and their net asset value. But even on normal trading days these gaps exist.  The reported deviation between the ETF closing price and the NAV at the end of the day is less than 2% for ETFs that track major market indices.  Unfortunately, the average at the end of the day is not relevant because you are buying and selling during the trading day – not at the end of the day.

In addition, the ETF’s underlying investments need to be liquid — meaning, the securities have to be bought and sold very easily. Many ETFs launched today are tracking assets that are difficult to price in volatile markets.  For example, bonds and thinly traded company stocks cannot be sold quickly without putting pressure on the price.  An ideal ETF would work like Wal-Mart. To be successful as the low-price leader, Wal-Mart has to make all product offerings pretty much the same in every store so they can buy in really large quantities. The company cannot afford to carry locally-made products that are produced in small quantities, because they would never satisfy the demand of their sizeable customer base.  ETFs are no different. They need access to large quantities of highly liquid stocks for the computer trading to work. Deviate from homogenized, pre-packaged items—by going into niche markets, for example—and the business model fails. The ETF industry understands these flaws, which is why ETF issuers like Vanguard are quietly taking out multi-billion dollar lines of credit to shore up their ETFs. This was before the August market turmoil. In a financial crisis, even Vanguard has its limits.

Another reason to avoid ETFs – High Frequency Trading firms (HFT). These computer-driven trading firms make millions by front-running buy and sell orders, turning profits in mere milliseconds. ETFs, especially the liquid ones, are the perfect mechanism for their money-making machines, because HFT firms need large orders to make worthwhile profits on the slimmest of margins. (You can learn more about HFT firms and their effect on the markets in Michael Lewis’s book Flash Boys.)

After the August 24 crash, one HFT firm bragged they had their best trading day ever, helped by a lack of transparency in ETF prices. That day, the New York Stock Exchange invoked a rule for market makers allowing them to keep buy and sell prices under wraps. The intent was to contain the potential for panic. But it also contributed to the wide discrepancy between certain ETF prices and their net asset values. Savvy institutional insiders took advantage of this gap, buying ETF shares from panicky sellers at extremely discounted prices and taking big profits when prices rebounded.

The final reason to avoid ETFs is they increase the likelihood of a trading error.  Trade errors can get really expensive.  If this attorney’s client understood what a limit order meant, he would have saved $2 million. Trading individual stocks, bonds and ETFs is not an easy task especially on a volatile trading day. What if you planned to sell your ETF on August 24 at 10:30 AM to pay for your child’s college?  Did you know that it was 20% below the NAV?  It is really difficult to know if you are buying or selling at the right price unless you have a back stage pass on Wall Street.  It only takes one trading error to wipe out a lifetime of savings.

ETFs are made to appear simple when they are anything but simple. While open-end mutual funds are not perfect, they don’t have any of these issues and there are plenty of low cost options which are very competitive with ETF’s fee structure. The only thing you give up – you can only trade once a day.  That is not so bad.  In fact, it’s good for investors to have the time to think about their actions before they take them.  I don’t think it is possible to fix these flaws so we will continue to avoid  ETFs.  We recommend you do the same.